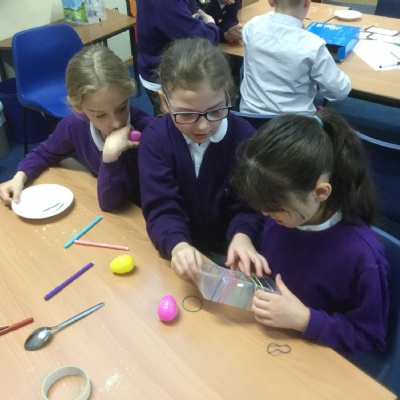 To launch the new topic, we started off the half term by making and evaluating instruments, composing a stormy soundscape and creating mood art.

The children were extremely busy on the first day back after half term. They worked well together in the morning to make a range of instruments including egg shakers, loaf tin guitars, water bottle guiros, ocean drums from paper plates and water bottle panpipes. They explored different ways of playing these instruments and also considered lots of explorative questions such as 'Do thicker elastic bands create lower or higher sounds?' When they had finished making their instruments, they were given the chance to perform in small groups or solo. There were some really creative rhythms and it was really great to see the children performing with confidence.

After this, we then worked as a class to create a stormy soundscape. The children first used their own instruments as well as some from the music trolley to create the rain, starting quietly and building it up. They then considered how they could create the effect of wind using wind chimes, their homemade panpipes and metallophones. Finally, they built in the sounds of thunder using a range of instruments and even their own bodies!

Following this, we started to look at mood art and how it is created. We discussed how music can make us feel different emotions and how this could be shown using colours and different lines and shapes. The children listened to Gustav Holst 'The Planets - Mars' and 'The Planets - Jupiter'. There were some very creative mood art pieces that managed to portray the mood of the music perfectly!