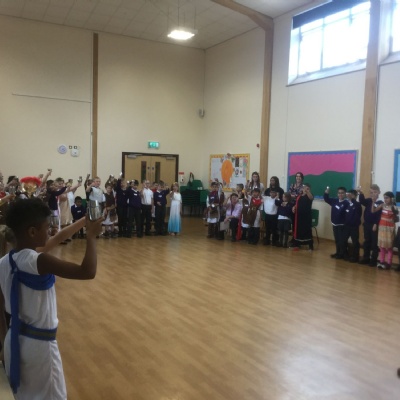 To launch our topic, 'I am Warrior!' Year 4 took part in an exciting Roman day to experience what life was like for someone living in Ancient Rome.

Throughout the morning, the children were given the opportunity to complete a wide range of activities including: making lamps, herbal remedies, mosaics, a Roman style painting, charms for a Roman bracelet, Roman pots and an embossed broach.

Just before lunch, the Roman army defeated Boudicca and so the afternoon was spent celebrating - Roman style! Some were appointed as slaves while others were given the task of entertaining through the learning of plays and dances. The Roman soldiers also showed off their army formations.

Thank you to all of those that dressed up :)