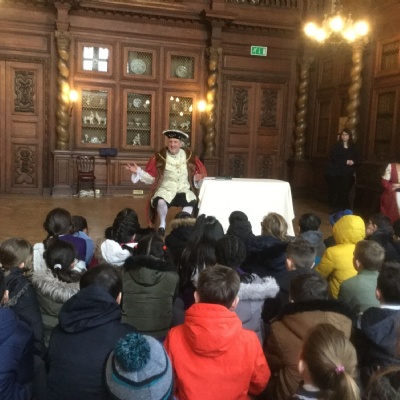 On Thursday 9th January, the students in year 5 visited Burghley house for a Tudor day. The day was designed to introduce the students to their new topic 'Off With Her Head!'

When we arrived at Burghley house, we were greeted by a lady in Medieval dress. She took us into the great hall and sat us down by the fire. Suddenly, we were startled by Henry VIII who surprised us from a secret door behind us. He told us about all of his wives and shared many interesting facts with us. He also answered many of our questions.

After that, we were taken to the Tudor kitchen, where we learnt about Tudor food and the way that the Tudors cooked. We learnt that they would even eat turtle soup! Next, we learnt about the Tudor banquet and the hierarchy system that was involved. Only the very richest sitting at the table would be entitled to all of the best meats and foods such as marzipan. The poorest at the table would only have access to the fruit, cheese and some of the worst parts of the bread, they would also eat this from a wooden plate called a trencher.

In the afternoon, we learnt that a Tudor pocket was something that the Tudors would use to keep anything loose in. This could include money, keys and the poor would even keep dice in theirs (for entertainment purposes). We then got the chance to make our own Tudor pockets from a circular piece of cloth, stencils, a piece of string and some beads. These have been sent home.

We all thoroughly enjoyed the day and the children's behaviour was fantastic, they were a real credit to the school.